When a coating is applied to the surface of a workpiece of various materials, the coating to obtain a good atomization depends on many factors. Coatings, spray gun selection and spray techniques are undoubtedly important. A thorough understanding of the spray tool, the air atomizing spray gun, is the best way to achieve high quality finishes.

1. The paint pot of the gravity spray gun is designed on the upper part of the spray gun. The paint relies on its own gravity and the venturi effect formed by the compressed air in the nozzle and the hood to generate a vacuum to spray the paint;

3. The paint delivery of the pressure-feeding spray gun is carried out by the pressurization of the paint conveying equipment, generally by the paint pressure tank or the diaphragm pump, because the paint is sent out by pressure, and the paint flow can be adjusted by applying different pressures. The nozzle diameter generally used is smaller than the above two types of spray guns.

The basic structure of the spray gun consists of the gun body, nozzle set (hood, nozzle and needle, referred to as three-piece), control components and other accessories. In order to achieve a perfect spray effect, it is inseparable from the core components of the spray gun. The nozzle set of the spray gun is usually produced by computer inspection and monitoring. Some responsible and professional manufacturers will manually adjust each set of nozzle sets, and combine them after the actual test. Therefore, when replacing the nozzle set, the three-piece set is strictly prohibited from being randomly combined, otherwise it will affect the perfect coating effect.

The nozzles and needles of the world-branded spray guns on the market are precisely machined from the hard wear-resistant and corrosion-resistant V4A steel. The inside of the nozzle is a tapered coating passage that matches the front tip of the needle. It acts as a paint valve.

The main functions of the air spray gun nozzle are reflected in the following three aspects:

1. Provide a valve seat for the needle valve (the tip end of the needle) to restrict or cut the passage of the paint;

2. Control the flow of the paint; direct the paint to the atomizing gas stream. The selection of a nozzle of the appropriate diameter is usually determined by parameters such as the viscosity of the coating, the properties of the applied coating, the thickness of the coating required, and the size of the area to be sprayed. The basic function of the spray gun is to use compressed air to blow the paint into droplets and blow it onto the object to be coated. At present, air atomizing spray guns mostly use external mixed atomization. Air nozzles provide the primary method of atomization. The primary atomization is accomplished by the space between the paint nozzle and the hood (i.e., the central atomization orifice), and the air column and paint stream from the space cooperate to produce a first level of atomization of the coating. The auxiliary atomizing holes are identical to the angle of the air nozzle and are located at the end faces of the hood. These holes serve two purposes:

3. Make the spray pattern not expand too fast, and keep the end face of the nozzle hood clean. If these holes are blocked or not present, it will cause eddy current or backflow; it is especially effective for high flow rate material atomization, which produces the second stage atomization of the paint. The fan control holes of the hood provide airflow to form a fan-shaped pattern. Without the air jets of these fan control holes, the atomized airflow will be round rather than elliptical. The number and size of the air holes on the hood of the spray gun are matched with the overall design of the spray gun. Therefore, the atomization of the spray gun cannot be judged according to the number and size of the air holes.

(1) Conventional high-pressure atomization method:  The spray pressure of a conventional high-pressure spray gun is generally 4.0 bar, and the paint is atomized by the pressure of compressed air. Therefore, the lance pressure of the traditional spray gun must be high enough to have enough energy to atomize the paint, but the high atomization pressure will cause the sprayed material to produce a large flow rate, when the paint flow rate is too fast. When the ground is sprayed on the surface of the workpiece, a certain rebound will occur to form an overspray, which greatly reduces the transfer efficiency of the paint (ie, the paint rate). Its transfer efficiency is generally only about 35%-45%, except that it generates unnecessary waste and paint waste.

(2) HVLP high-flow low-pressure atomization method: HVLP (High Volume Low Pressure) high-flow low-pressure spray technology is a modern advanced spraying technology in the coating industry. What is high flow and low pressure? It is based on a very low hood atomizing pressure (0.7 bar, inlet pressure of 2.0 bar) atomizing paint, thereby reducing paint loss and environmental pollution caused by overspray, with a relatively high compressed air flow (air consumption) 430 liters per minute to replenish energy and complete atomization; HVLP was first proposed in 1988 by the South Coast Air Quality Administration of California, USA, and formulated the relevant 1151 environmental management regulations. At that time, only the air hood at the hood of the spray gun was specified. A spray gun with a pressure lower than 0.7 bar (≤ 0.7 bar) and a paint transfer efficiency higher than 65%, that is, an HVLP spray gun can be used in the area. The HVLP environmentally friendly paint series spray guns are characterized by saving paint (actually saving 15-30% of the paint compared to conventional spray guns) and reducing pollution. However, the air consumption of about 430 liters per minute is slightly higher than that of conventional spray guns, so it needs to be stronger. A stable compressed air supply system and a slightly different spray method than conventional spray guns.

HVLP environmentally friendly paint spray gun and RP paint efficient spray gun have a common feature, that is, the atomization pressure is lower, the transfer efficiency of the paint is higher than 65%, and there is also a common feature in the nozzle structure, that is, both are adopted. One of the most advanced designs in the world, the air spoiler design, ensures that the atomizing air is evenly ejected from the inside of the hood. When the atomizing air is equalized, the atomized coating is very uniform, and thus the coating color is guaranteed to be evenly sprayed.

The elliptical spray width of the spray gun can be divided into three layers: the innermost layer is a wet layer, the middle is an atomized layer, and the outer layer is an overspray layer.

The primer is a sand mark or trachoma that fills the surface of the object to be coated. Primer spray guns are mainly required to have good filling properties and do not emphasize that they are sprayed too much. The spray width of the primer spray gun must be that the wet layer should be wider than the atomized layer. It only needs to spray the primer evenly on the surface to be coated of the workpiece. The atomized layer should be narrower than the wet layer, especially the overspray. The layer should not be too large; the primer coating requires better filling, and the filling is mainly done by the wetting layer.

The spray gun is a tool that is perfectly applied to the object after atomization of the paint. In the past, the paint masters used traditional high-pressure air spray guns, which, due to low transfer efficiency, caused a large amount of paint and solvent to be emitted into the atmosphere, seriously polluting the atmosphere. Nowadays, with the continuous development of the automotive industry and the coating industry and the increasing awareness of environmental protection, countries and automobile companies have gradually adopted environmentally-friendly coating materials to discharge harmful volatile substances generated during the spraying process. The amount meets environmental requirements. Therefore, automotive coatings and industrial coatings are developing in the direction of high solidification, water-based, and low VOC emissions. The European Union has also proposed a legal amendment to reduce the amount of volatile organic compounds (VOC) contained in automotive paints, metal decorative paints and varnishes by 50%. The VOC content per liter of water-based paint is controlled below 50 grams, and the VOC content per liter of solvent-based paint is controlled within 75 grams.

Combination of spraying techniques and equipment

Good spray is the perfect combination of spray equipment and spray technology. To maximize the function and performance of the gun:

2. Adjust the flow rate of the paint to the maximum. If the amount of paint is too large, try not to move the needle too far to avoid premature wear of the needle;

3. When spraying with a spray gun, the hood of the spray gun should be perpendicular to the surface of the workpiece to be sprayed;

4. When the spray gun moves, its trajectory should be parallel with the sprayed surface. Depending on the spray gun, the spray distance is different (Table 1);

5. When spraying, the whole arm moves through the surface of the workpiece to keep the wrist straight and can not be operated as an arc track, so as to avoid uneven film color and coating thickness;

8. Depending on the type of paint, the speed of the spray gun is 30-50 cm per second to obtain the best film thickness. 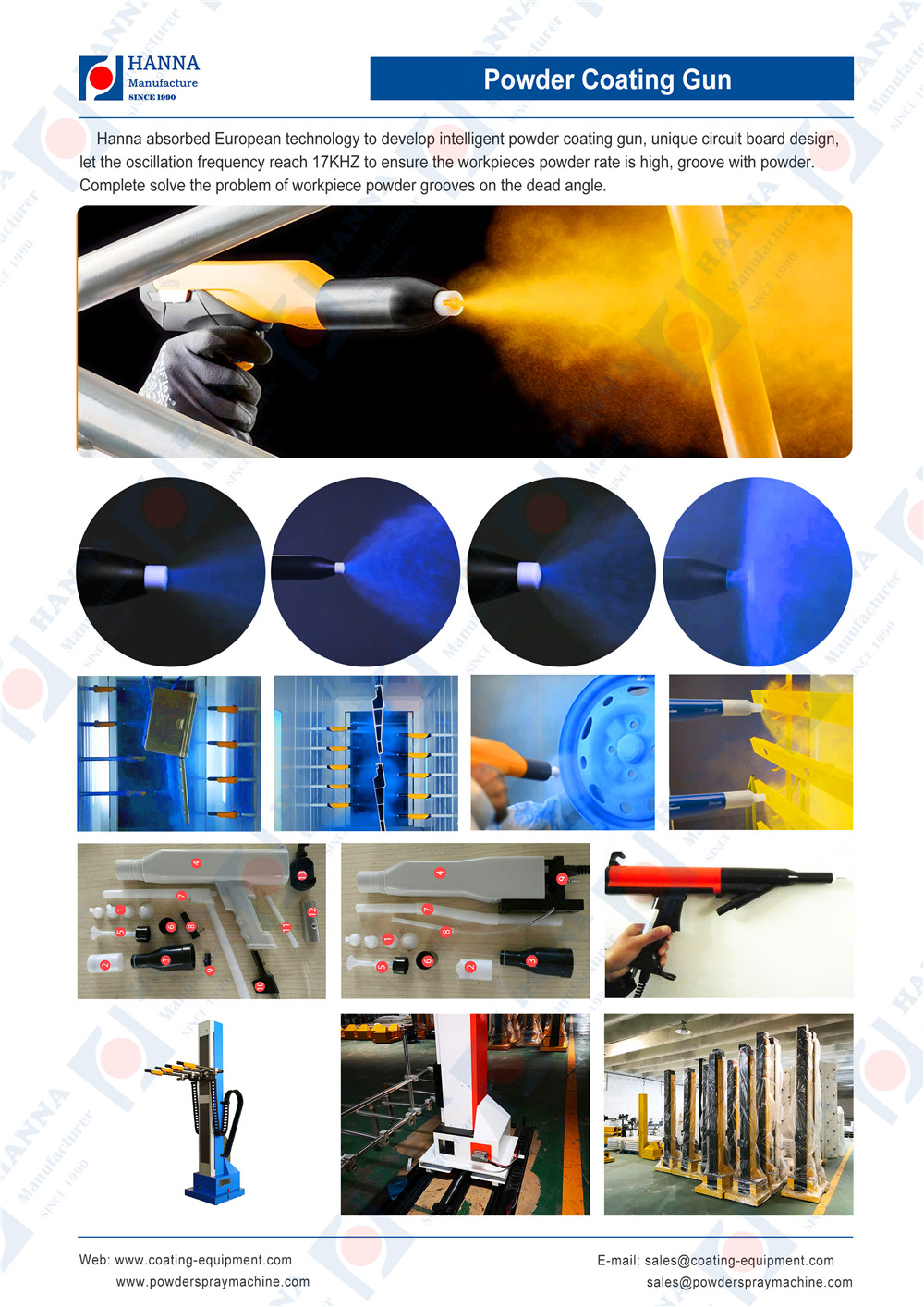